As a docent at the state Museum of Art here in Santa Fe, I belong to a group of docents who meet monthly for various art presentations. With COVID 19, of course, we cannot meet, but we try to help each other out with various projects, presentations, and challenges. One challenge was to describe a piece of art in your own home. I choose to write the following story. I hope you enjoy it.

A favorite piece of art 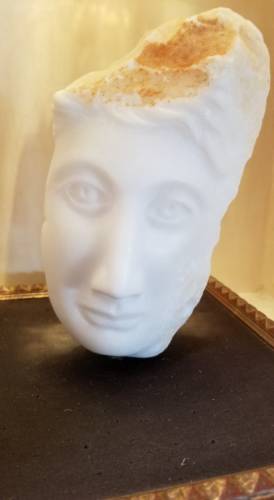 This is a photo of a marble sculpture that, at least for me, brings together ancient and modern themes, beauty,  stories of friendship, and tragedy.

She was sculpted of Parian marble by Aristedes Varrias. Parian marble is admired as a fine-grained semi-translucent pure white and flawless marble quarried on the Greek island of Paros. It is the same marble used by Alexandros of Antioch for his Venus de Milo; it is the marble on the Parthenon; it is Napoleon’s Tomb, among many, many famous sculptures and buildings since the sixth century BCE. This face has smooth beautiful features but also the rough marble straight from the quarry. The ancient and the modern.

Aristedes Varrias was born and raised on Chios, educated in the United States (Princeton), and has lived with his Parian-born wife in Paroika for many years, where he was an educator and artist. Aristedes climbs down into the ancient quarry where he gathers leftover chunks of marble to turn into things of beauty. I am happy to say that I have been in those ancient quarries myself, to see the marble and the chisel marks of ancient workmen who laid on their backs to chip away at the stone. Also clearly visible are “Kilroy was here” signs, some modern and at least one dated 1792. I have also seen a half mountain-side of pure marble, sliced by modern machines into a vertical sheet of shiny pure white. Aristedes continues the love of the ancient marble by giving tours to visitors from around the world. We are happy to call him our friend.

The head was created in 2000 to honor a tragic event and the heroes born from it. One night while we were having dinner in Paroika, the port of Paros, the local men  in the restaurant suddenly got up from their tables and disappeared. Word had come that the Samina had crashed in the harbor. The Samina was a ferry that we had often taken on trips from Piraeus (the port of Athens) to Paros or to Crete. It was a rainy, stormy night in the Mediterranean, but that was not the only reason the Samina sank. With 533 people on board, no one was watching the ship. It was on autopilot and the captain and first officer were busy watching football on television. It was an old ship and the port stabilizer failed to work. Things went from bad to worse. Eighty-three people died that night, including the port master who had a heart attack from the stress. Some passengers and local authorities were heroes that night; later five crew members were sent to jail for eight to nineteen years for negligence and manslaughter, including the captain and first officer. Two months after the disaster the executive in charge of the company in Athens committed suicide.

Two days after the tragedy while we walking the town streets, an old friend from Boston greeted us. We did not know he was traveling in Greece so we were surprised to see him. He had been on the last journey of the Samina.

Aristedes sculpted this beautiful but hauntingly sad face. Her name is Martyria, Martyr. Wrapped in an old towel, she boarded a ferry with us, bound to Athens, then home with us.

With warm greetings and affection,

We may request cookies to be set on your device. We use cookies to let us know when you visit our websites, how you interact with us, to enrich your user experience, and to customize your relationship with our website.

Click on the different category headings to find out more. You can also change some of your preferences. Note that blocking some types of cookies may impact your experience on our websites and the services we are able to offer.

These cookies are strictly necessary to provide you with services available through our website and to use some of its features.

Because these cookies are strictly necessary to deliver the website, refusing them will have impact how our site functions. You always can block or delete cookies by changing your browser settings and force blocking all cookies on this website. But this will always prompt you to accept/refuse cookies when revisiting our site.

We fully respect if you want to refuse cookies but to avoid asking you again and again kindly allow us to store a cookie for that. You are free to opt out any time or opt in for other cookies to get a better experience. If you refuse cookies we will remove all set cookies in our domain.

We provide you with a list of stored cookies on your computer in our domain so you can check what we stored. Due to security reasons we are not able to show or modify cookies from other domains. You can check these in your browser security settings.

These cookies collect information that is used either in aggregate form to help us understand how our website is being used or how effective our marketing campaigns are, or to help us customize our website and application for you in order to enhance your experience.

If you do not want that we track your visit to our site you can disable tracking in your browser here:

We also use different external services like Google Webfonts, Google Maps, and external Video providers. Since these providers may collect personal data like your IP address we allow you to block them here. Please be aware that this might heavily reduce the functionality and appearance of our site. Changes will take effect once you reload the page.

The following cookies are also needed - You can choose if you want to allow them: