You are here: Home1 / Work2 / Bust of Archilohos

Aristidis varrias, volunteered to materialize the Parian municipality’s request of sculpturing the bust of Archilohos, the great Parian poet and father of lyric poetry, thus fulfilling his own personal ambition along with the desire of generations of Parians. 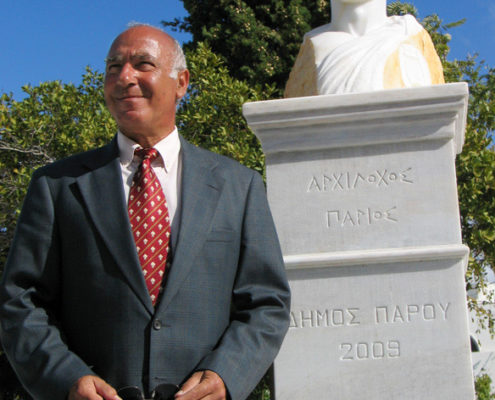 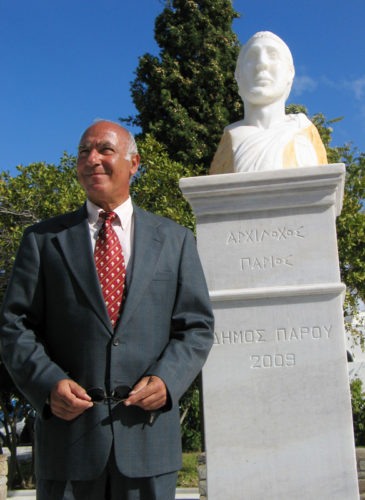 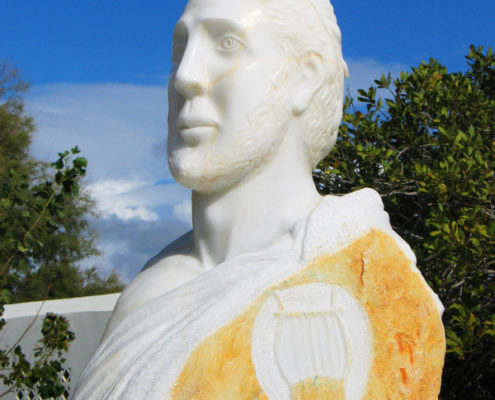 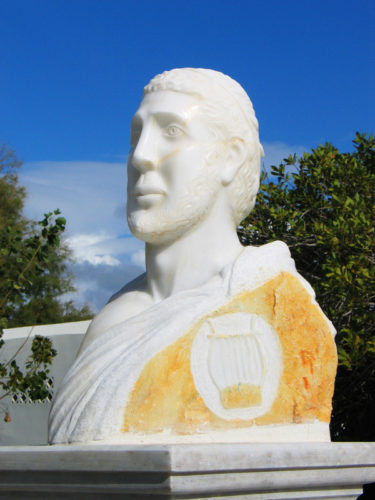 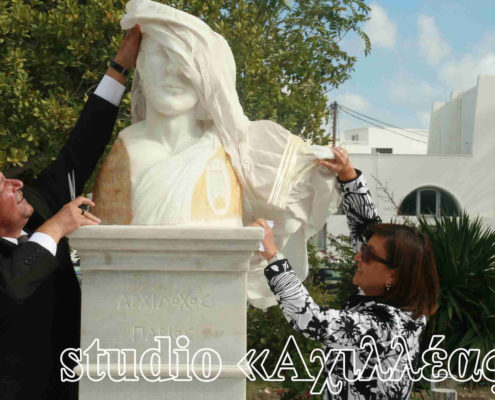 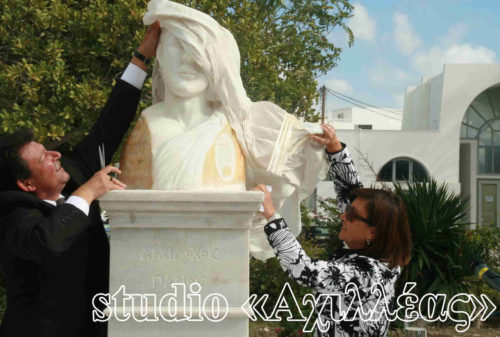 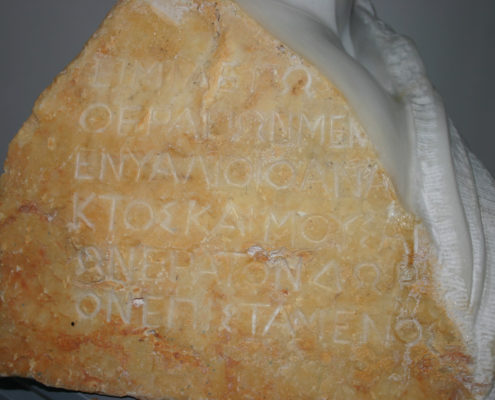 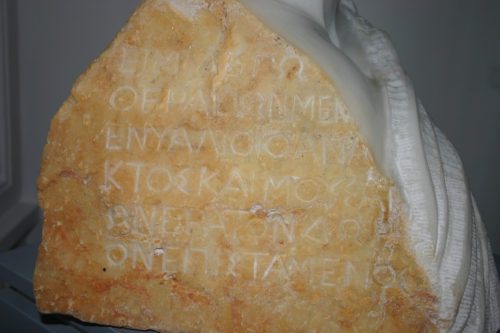 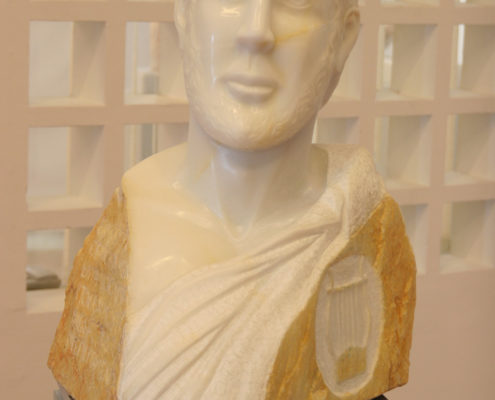 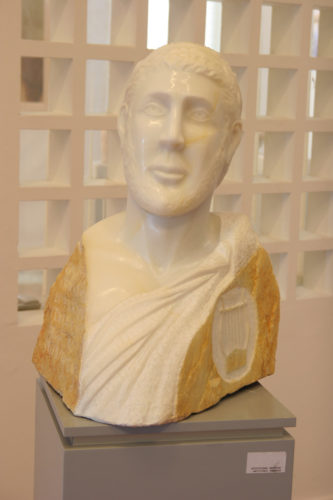 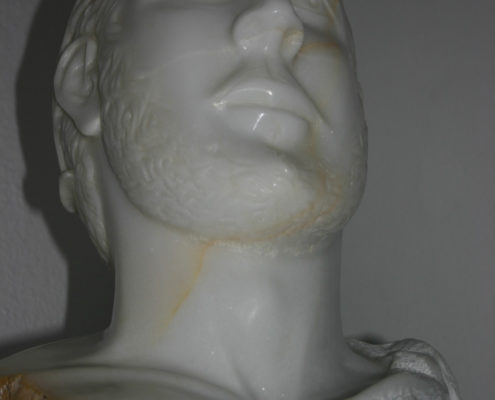 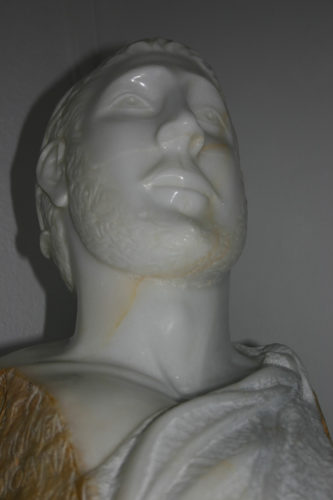 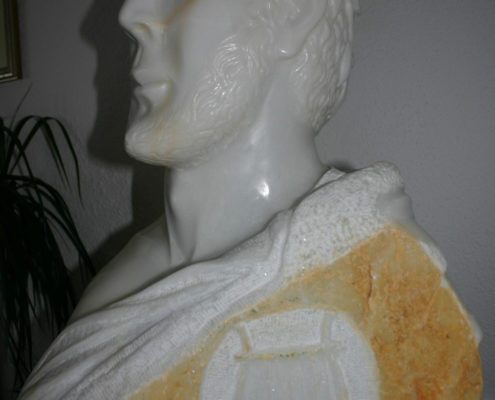 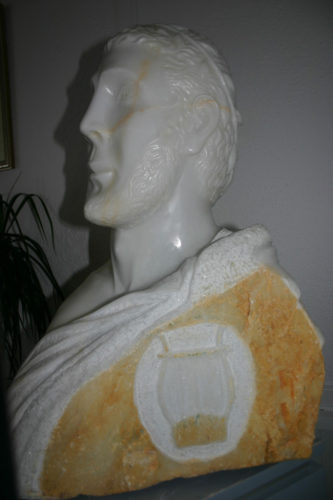 Aristidis varrias, volunteered to materialize the Parian municipality’s request of sculpturing the bust of Archilohos, the great Parian poet and father of lyric poetry, thus fulfilling his own personal ambition along with the desire of generations of Parians. The sculpture was recently completed and delivered to the Municipality of Paros.

To recreate the form of the great poet, the sculptor studied the few archeological findings that describe his appearance, and mostly the ancient parian coin bearing the face of Archilohos on the one side and the lyra on the opposite one. ( this unique coin is one of the 106 parian coins that consists the Varrias Collection, which was donated recently to the archeological museum of Paros and is on the phase of preservation, before it’s public exhibition).

The bust of Archilohos was sculptured on a big chunk of marble, shaped as a triangular pyramid. 2/3 of the piece consisted of excellent quality Parian marble and the remaining third of transparent, slightly blue quartz crystal. The selection of this piece was not only based on size criteria, but also due to the fact that it offered the opportunity to express the kindness as well as the power of Archilohos’s, the warrior and poet, personality.

The bust is about 1.5 times the natural size. On the right and front surface of the triangular shape is engraved a lyra, the musical instrument that is on the back side of the Archilohos coin. On the left and front side, on the other hand, is written the epigram: “ΕΙΜΙ Δ ΕΓΩ ΘΕΡΑΠΩΝ ΜΕΝ ΕΝΥΑΛΟΙΟ ΑΝΑΚΤΟΣ ΚΑΙ ΜΟΥΣΑΙΩΝ ΕΡΑΤΟΝ ΔΩΡΟΝ ΕΠΙΣΤΑΜΕΝΟΣ”.

The bust of Archilohos was set in the middle of St. Nicholas Park at the harbour of Paros. The Mayor of Paros Mr. Christos Vlachogiannis and the vice mayor Mrs. Anna Kagani uncover the bust on September 11th 2009. At the ceremony the bust of Archilohos was presented by the president of the institute of Archeology of Paros and Cyclades Dr. Dora Catsolopoulou, the poet and Archolohos’ biographer mr. Christos Georgousis and of course the artist, Dr. Varrias 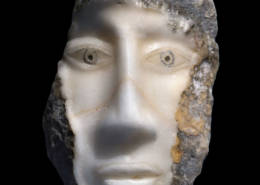 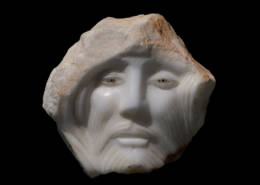 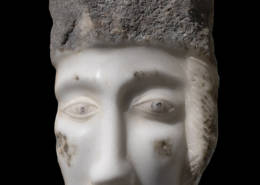 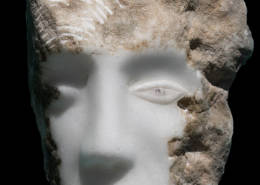